This is a non-independent marketing communication commissioned by Invesco. The report has not been prepared in accordance with legal requirements designed to promote the independence of investment research and is not subject to any prohibition on the dealing ahead of the dissemination of investment research.

The past decade hasn’t been kind to UK blue chips. A large cap index dominated by sluggish giants, combined with the fallout from Brexit in 2016, has meant returns for many investors in London-listed securities haven’t been particularly strong.

But focusing on the country’s bigger companies means missing out on other opportunities lying further down the market cap scale. Over the decade up until December 21st 2021, the Numis Smaller Companies (NSCI) index produced total returns of 213.2%, compared to the 108.1% generated by the HSBC FTSE All-Share Index Fund.

Although that disparity is starker than in the past, it reflects a historical trend in which smaller UK companies have tended to outperform the wider market. Indeed, a £1,000 investment in a fund tracking the Numis index back in 1955 would have yielded total returns of £7.9m, prior to any fees charged, by the end of 2020. A fund following the same process as the HSBC FTSE All-Share Index Fund would have returned approximately £1.1m over the same period, without considering the impact of fees.

This dynamic is something the team at Invesco Perpetual UK Smaller Companies (IPU) is acutely aware of. The investment trust screens around 1,000 smaller UK stocks and typically holds about 80 companies, with close to 80% of its holdings in firms with market caps under £1.5bn.

Taking this approach has paid off, with the trust producing total share price returns of 331.1% in the decade up to December 21st 2021 – substantially ahead of the returns the NSCI achieved over the same period. The trust also aims to pay a dividend, equal to 4% of NAV, at year end, something that may appeal to investors nervous about the lack of income typically associated with small caps.

Looking forward to 2022, the investment trust’s managers believe the conditions remain positive in the UK market, with the obvious caveat being Covid still seems to have the potential to scuttle a prospective recovery.

Assuming that doesn’t happen, the UK economy looks likely to be one of the best performers in the next couple of years compared to other developed markets. One recent report from the International Monetary Fund estimated that UK GDP will increase by 6.1% this year and 5% in 2022.

A positive macroeconomic outlook fits neatly with a market that IPU managers Jonathan Brown and Robin West believe is still relatively undervalued. That’s true even for the smaller companies that the pair focus their efforts on.

At the end of September, UK equities were still trading at the lower end of their 10 year forward price-to-earnings ratio range. By comparison, the US, France, China, Hong Kong, and Japan were all trading way ahead of theirs.

Still quality companies to be found

A common retort to this is to point out that UK companies are valued poorly for a reason. Investors don’t have much faith in them and are steering clear as a result.

Recent merger and acquisition activity makes this argument seem a little faulty. The past year has seen a surge in takeovers across the UK equities market, with big players like Morrisons and smaller companies like Sumo Group, an IPU holding, being impacted.

That private equity groups and other companies are happy to snap up these businesses suggests the UK isn’t just cheap because the companies are of a poor quality. Instead, market participants have arguably been unreasonably harsh on them and undervalued them as a result.

Some of these deals, which usually resulted in the buyer paying a hefty premium, have benefited IPU. Video game developer Sumo was acquired by Chinese tech giant Tencent at a 43% premium and US defense group Cobham paid a 63% premium to take over Ultra Electronics, another member of the IPU portfolio.

In total, 8 companies in the trust’s portfolio have been acquired this year, a remarkable number for a trust that usually holds around 80 stocks and a sign the team has something of a knack for identifying good companies at a reasonable price.

Sticking to their knitting

This M&A bonanza could continue into the new year and, should that be combined with a better economic outlook, this may help IPU’s performance.

However, Brown and West are keen to stress that they are not looking to game macroeconomic trends but focus instead on investing in quality businesses at attractive valuations, which have the potential to grow substantially over the medium-term. The pair also use four different themes when weighing up whether or not to buy into a company.

Gym Group fits into the consolidation theme. The low-cost gym operator has managed to weather the pandemic storm better than its competitors and its management has one of the strongest pipelines of new sites in its history, with many former retail locations available at lower rental rates.

Keywords Studios is a slightly different story as it fits within the trust’s growth theme. The Irish company, which provides a suite of outsourcing services to video game developers, has seen its revenue increase almost 10-fold since 2015. The already vast gaming industry may provide further support here too, as the sector is predicted to average annual growth of 12.9% through to 2027.

A good economy means nothing for a bad company

Alongside many of their stablemates in the IPU portfolio, these two companies have managed to perform well in the past without the positive pressure of a bull market or particularly positive economic tailwinds.

Looking forward, if the climate for business improves – and it’s difficult to see how it can get much worse as we sit here wondering whether another lockdown is in the offing –, it seems plausible that this would be good news for the companies in IPU’s portfolio.

Better news for IPU’s investors is that the team has demonstrated its ability to identify winning companies which can thrive regardless of the macroeconomic backdrop. This is an attractive quality, particularly in a market where everything is far from certain. IPU was trading on a discount of 12.6% as at 20th December 2021, almost twice the average discount for the AIC UK Smaller Companies sector (7.2%), and this might add to its appeal too.

Source: Morningstar, as at 21/12/2021. Bid-Bid in constant currency terms (GBP) with income reinvested.
Past performance is not an indicator of future results. 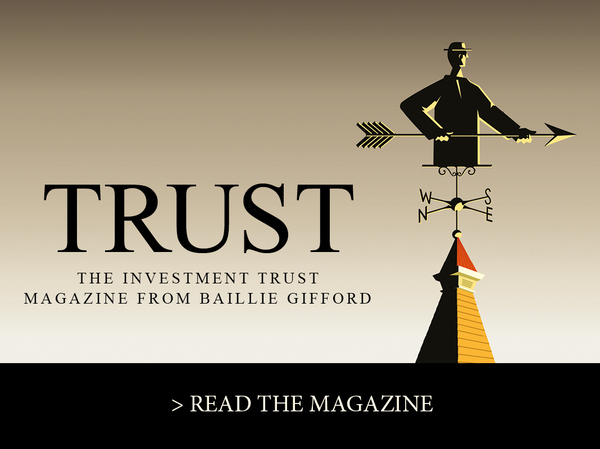