We discuss the opportunity as biotech stocks trade at record low valuations, despite strong prospects for the sector...

To achieve long-term capital growth by investing in biotechnology and other life sciences companies.

This is a non-independent marketing communication commissioned by International Biotechnology. The report has not been prepared in accordance with legal requirements designed to promote the independence of investment research and is not subject to any prohibition on the dealing ahead of the dissemination of investment research.

International Biotechnology Trust has seen a strong rebound in performance terms this year after performing relatively well versus peers in 2018, when a strong move toward ‘risk-off’ sentiment among investors saw equities generally in negative figures, with biotech no exception.

As at 7 May 2019, the trust is up 10.6% in NAV total return terms since the start of January, beating the NASDAQ Biotechnology Index, the peer group and its main rival – Biotech Growth Trust.

Last year, when the MSCI World was down 7.4% and the NASDAQ Biotechnology Index lost 3.2%, the trust lost just 4.4% - outperforming Biotech Growth, which lost 14.3%, by a whacking margin.

The four strong management team, led by Carl Harald Janson, aims to generate long term capital growth and deliver a yield of 4% of NAV via a portfolio of US, European and – to a lesser extent – unquoted investments in the biotech sphere.

In addition to the diversification benefits afforded by the trust’s scale, with almost 100 underlying holdings including the unquoted element, the trust’s unique focus on avoiding ‘binary’ risk events has helped it to avoid a number of ‘blowups’ which have affected its rivals, notably Biogen’s abandoned Alzheimer’s drug trials which saw it lose more than 30% of its market cap at the end of March this year.

The trust’s unquoted portfolio – where the emphasis has shifted from direct investments to investments via a venture fund – is already proving its worth, delivering 1.3x capital invested so far, with the vast majority of its holdings still valued at or close to their original investment value, leaving plenty of room for upside.

The trust has seen significant improvements to its share register, too, with far less concentration and a far broader spread of investors – among whom more than half are now private wealth managers or retail investors. Much of this has been driven by the introduction of a dividend policy which sees the trust pay out a yield of 4% of NAV per annum, converting some of the capital growth it generates to do so.

Whilst converting capital to income does limit the maximum potential for capital growth, the appeal of this yield means the trust has moved in from a persistent discount and now trades at a premium, and has been issuing new shares since Q4 last year – of which more than half a million have come to market. This should, in time, mean the trust’s ongoing charges ratio is lower as the trust’s fixed costs are spread over a wider shareholder base.

This is an interesting time for the trust. The managers believe that with economic growth on a fairly solid footing going forward, and long-term demand for therapeutic drugs driven by an ageing population, there is a secular tailwind behind biotech companies. We have heard from the trust before that a more ‘business friendly’ approach taken by the Food and Drugs Administration would lead to greater opportunities among biotech companies, and that seems to be playing out; last year saw more new drugs approved by the FDA than ever before.

Despite this, valuations among biotech companies remain very reasonable – particularly when compared with other sectors in the US. Indeed, while popular wisdom tells us that US equities are expensive after a long rally, the biotech sector is significantly cheaper in p/e terms than other major sectors in the US and far cheaper than the S&P500. Large cap biotech stocks are trading at record low p/e’s.

Large cap biotech valuations vs other US sectors 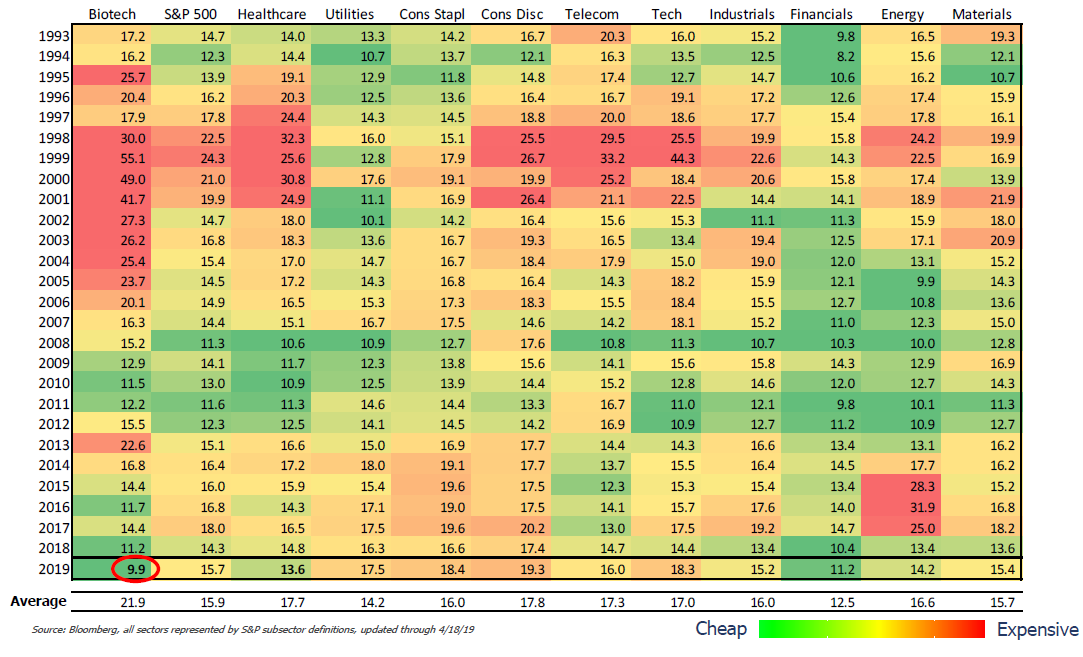 Against this backdrop, and with mean reversion for biotech p/e ratios in mind, International Biotechnology is a compelling option for long-term growth and a solid income, with a clear – and clearly effective – approach to mitigating risk by avoiding ‘binary events’ where share price volatility is at its most dramatic. This latter feature particularly, given the biotech sector’s elevated risk profile, has obvious appeal.

The long-term demographic tailwind behind healthcare focused companies – as the developed world gets older and fatter, and expectations of better healthcare in the developing world increase in line with living standards – is clear. International Biotechnology Trust is a direct beneficiary of that trend, and we think the strength of the management team, particularly their practical experience in the industry – not just as investors – puts the trust in good stead to profit from it.

Biotech is a ‘risk-on’ sector, however, and drawdowns can be intense. We think the team deal with this well via their strategy of mitigating risk by diversification across sub-sectors, selecting therapeutic areas with defensive characteristics, avoiding large “elephants” accounting for any more than 10% of the portfolio, and avoiding binary events – divesting stock as companies approach crucial trials even if this means missing out on the last few yards of upside – but clearly investors should be aware that volatility is a feature of this strategy.

That said, the risk of drawdown is more than compensated by the potential upside – or has been in the past. The maximum drawdown for the trust over the last ten years was 26% - a relative trifle compared to the 385% it delivered over the same period in NAV terms. Particularly for investors with long time horizons, then, we think the trust has clear appeal.

Pascal is a partner at Kepler Partners LLP and launched Kepler Trust Intelligence when he joined Kepler in 2015. Prior to this he managed FE Trustnet, one of the UK's largest investment research websites, for ten years. In a former life Pascal was a financial journalist and he has written extensively about investment trusts and other investments for the trade and national press.

Alternatives for Income Investors Slides and audio from our event focused on alternative routes to a reliable income… 01 October 2020 Slides and Audio: International Biotechnology View the presentation and listen to the audio from our 'Alternatives for Income Investors' event on 29 September... 30 September 2020 Trump v. Biden Two of our analysts debate who will win the US election and what that means for markets… 26 August 2020
View all related articles