2017 was by all measures a very good year for investors. With an equity market in full cry, we saw the FTSE 100 reach all-time highs on the final trading day of the year, and the S&P 500 achieve its first ever ‘perfect’ calendar year with positive returns every month. Meanwhile, volatility was low, particularly in the US, and the VIX Index ‘fear gauge’ continued to reflect a singular calmness among investors.

What a difference a year makes...

Volatility has come back with a bang in 2018, and after hitting a record high in January, the FTSE 100 lost more than 900 points before the start of April amid worries about US trade tariffs, increasing bond yields, technology valuations and the Facebook data scandal. April saw the tables turn and the FTSE 100 rise 453 points, or 6.42%, ending the month at the highest level since 31 January, registering the ninth best month for the FTSE 100 in the past decade.

Alongside the volatility in the markets, the first three months of the new year saw the weakest period of economic activity for Britain in more than five years, slowing the economy to a virtual standstill. As can be seen in the graph, GDP growth has been in steady decline over recent years, and sharp contractions have been seen across construction, industrial production and services. Additionally, other key areas have been subsiding including credit growth, mortgages approval, manufacturing and consumer spending. 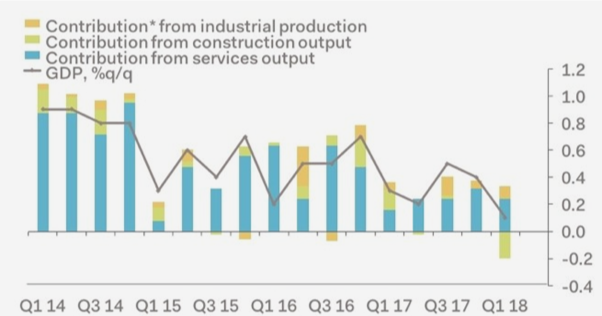 Having previously been one of the fastest-growing economies in the G7, the UK has managed to find itself holding the wooden spoon so far in 2018, a trophy that it looks likely to hold onto into 2019.

Against this backdrop and, perhaps as a result of (or combined with) an expectation of rising bond yields both in the UK and across the pond, there appears to be a very definite shift among investors towards fund allocations. Whilst open-ended funds are still seeing net inflows overall, a clear reversal in the types of funds they favour seems to be occurring, with net fund flows coming out of income products (bond funds) and into equity funds.

In the investment trust sphere, in which the dynamics of net flows are more subtle, JPMorgan estimate that the first quarter of 2018 saw a net capital inflow to the investment companies sector of £685m, with £1,697 gross inflows and £1,012m gross outflows. These figures represent a marked slowdown in investment activity, being 20% less than Q1 2017 and 43% less than Q4 2017.

Over the course of last year 22 funds raised £3.68bn in total (including follow-on fundraisings), but with most share issuance falling short of stated fundraising targets. Unless sentiment picks up significantly, we expect this figure to be substantially lower for 2018 given the slowly moderating level of confidence amongst investors, manifested by fewer entirely new trusts launching, but also follow-on equity raisings generally falling short of targets.

In terms of the funds that have successfully launched, the pattern among open-ended funds is echoed in the closed-end sphere. There has been a perceptible weakening in the dominance that “alternative income” funds have held for the past five years or so, but no clear single alternative style has emerged as a replacement.

We examine some of the more recent investment trust launches to come to market...

Kepler Partners LLP considers this commentary to be a minor non-monetary benefit, as it:

1. Is intended to enhance the quality of service provided to you by us and is generic in nature;

2. Consists of short-term market commentary on the latest economic statistics and/or company results and/or information on upcoming releases or events;

3. Contains a brief summary of the author’s own opinion on such information;

4. Is not substantiated nor does it include any substantive analysis;

5. Reiterates the Kepler Partner LLP’s view on an existing recommendation or substantive research material; and/or

6. Is unlikely to impair your investment firm's compliance duty to act in the best interest of your client.

This report has been issued by Kepler Partners LLP for communication only to eligible counterparties and professional clients as defined by the Financial Conduct Authority.  Its contents may not be suitable for and are not to be communicated to or be relied on by retail clients. It is not an indication as to the suitability or appropriateness of investing in the security or securities discussed.